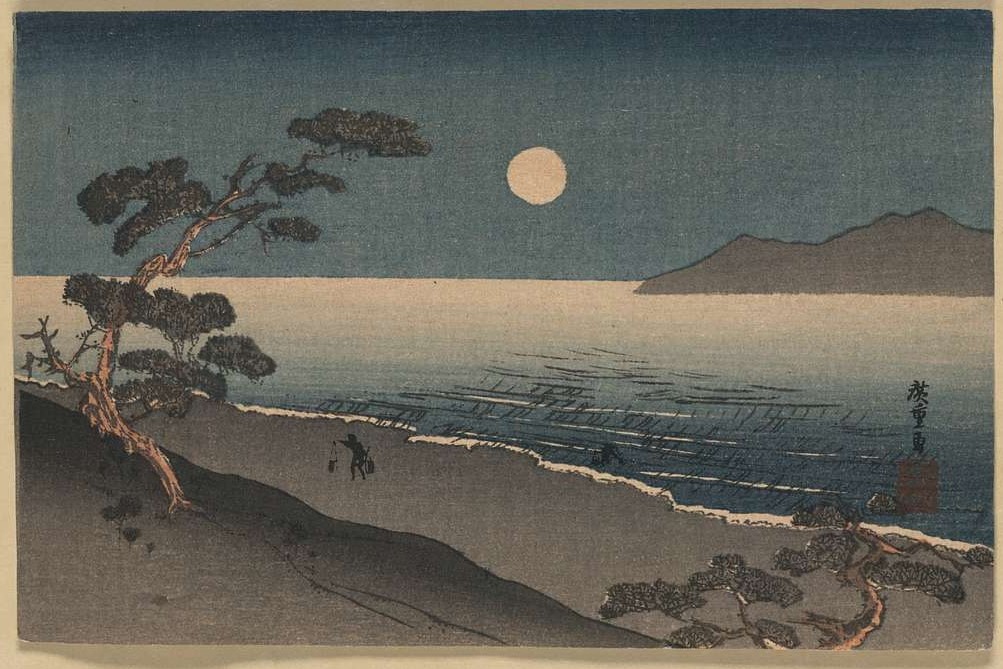 My wish, to disappear
Under the flowers.
Let it be a Spring death,
In Kisagari (that changing month),
That Bright Moon time of year.

Before the month of February has passed, I thought it fitting to add one more poem on the subject of Kisigari.

This poem is written not by Basho, but by Saigyō Hōshi (西行法師, 1118 -1190) a poet of the Heian period who lived to the age of 72. His life as a monk and his frequent journeys inspired Basho’s many journeys.

February is a month often overlooked because of its shortness, but also its in-betweenness, caught as it is between winter and spring. Nineteenth century American poet Henry David Longfellow gave us his thoughts on a February Afternoon, which begin like this: The day is ending, The night is descending; The marsh is frozen, The river dead. Matsuo Basho also gave us some thoughts on February (Kisagari). Both are a bit depressing.

Saigyō’s poem, on the contrary, is more uplifting, at least in the Buddhist sense of regeneration with Saigyō imagining that he is reborn as an early spring flower 花, Hana. The third line is particularly poignant. 春死なむ, Haru shinan conbines the idea of a death in spring and なむ which I understand to be “let it be,” and a reference to the Buddhist concept of Namu 南無.

Kisigari, 如月 is the Japanese lunar name for the month of February. It suggests the changing of the seasons, Spring approaching, a month with spring-like days. Sometimes written as Kinusaragi (衣更着, “Changing Clothes”) .

Yesterday, February the 24th, in Kansas it was 70 degrees, two days before that it was 0. What a difference a day or two makes.

I have one final comment to make on Saigyō’s use of の, no through out the poem. This personalizes, for me, the thought. Not being a native Japanese speaker it is just my personal thought.

My wish, to disappear
Under my flowers.
Let my death be in Spring,
In Kisagari (that changing month),
My Bright Moon time of year.

Naked am I
Still changing clothes
In Kisaragi, doesn’t it storm?

Recent events here in the Midwest reveal that Nature sometimes keeps its worst weather for February. January in Japan is bitterly cold. February, occasionally, will give hints of spring. The February weather changes day by day which explains why the Japanese lunar calendar name for February is kisaragi, 如月, or kinusaragi, 衣更着, which implies the changing of clothes in the anticipation of spring.

I am guessing Basho showed up for (or heard about) the Naked Man Festival, Saidai-ji Eyo — Hadaka Matsuri, held in Okayama in February each year. It has been going on 500 years, but in Basho’s time it was somewhat new. The idea of men, nearly naked, hadaka, jostling for a lucky object, hoping to become Fukuotoko, the “lucky man” must have seemed strange.

Thus, it is not hard to imagine Basho saying,

Undressing
Removing clothes
What, in February, it storms!

The lamp oil is freezing, the light is low, I am awakening!

Last night, the temperature dropped to a chilly -2 °F in western Kansas.

If this were 1870, not 2021, I imagine the early settlers would have had a hard time falling asleep in a sod dugout built into the side of a hill. A buffalo robe would help fight off the cold. Dried buffalo paddies when available were used for fuel. In the above haiku, Matsuo Basho gives us his impression of trying to sleep when the weather is bitterly cold, so cold that the lamp oil and the furnace barely provide light and less heat.

At the same time, he manages to turn it into a moment of enlightenment. Basho’s awakening, 寝覚哉, nezame kana, metaphorically is meant as a Buddhist enlightenment.

I did wonder what the Japanese used for lamp oil — rapeseed is the most common answer. I then wondered if rapeseed oil could freeze. It can. While the freezing temperature may vary according to the type of oil, -10 °C or 14°F will do the trick.

This means that our early Kansas settlers would have had a “awakening” like Basho’s.

For those curious as to the when and where of the poem, when is winter 1685-1687, and the place is Basho’s little cottage in the Fukagawa District outside Edo.

A Haiku should be a teaching moment, that is, it should make a point.

One day, when Bashō and his pupil, Takarai Kikaku (宝井其角, 1661–1707), were walking through the fields, they spotted dragonflies darting through the grass and flowers. Kikaku composed this haiku and looked to his master for approval.

A red dragonfly!
remove its wings —
a pepper pod!

“The dragonfly is dead.” the Master replied, “Now this is how to create life?”

From this to that
And back again,
Oh, can it ever end?
— Keihatsu!

Most translators attempting to explain the Kikaku/Basho exchange focus on Basho’s “positive” view, the red pepper becomes a dragonfly; scolding Kikaku’s “negative” view, taking life and not creating it.

We need not be one-sighted. This haiku also explains the Buddhist concept of Rebirth, 轉世.

A pepper becomes a dragonfly, a dragonfly becomes a pepper. So too, each of us enters as new existence after death, in an endless cycle called saṃsāra. This unsatisfactory cycle is considered to be dukkha, painful, and, hopefully, ends with enlightenment, keihatsu, 啓発.

It is a two-way street. Kyōiku wa sōhōkōdesu, 教育は双方向です. Our clues are found in the carefully chosen images. Tōgarashi, a red or chili pepper, also a spicy seasoning added to many Japanese dishes. Behold, a chef creates a spicy dish. Tsuketara meaning to turn on, light up, or switch on. Behold, on the one hand we have a chili pepper, now it switches to a dragonfly. Instead of using the single character 蜻, Qīng for butterfly, the transformative three character, akatonbo, 赤とん, is used, which means red dragonfly. These characters include the Japanese character と, which can best be understood in the context of “if and” or “when”.

In Japan, the dragonfly represents rebirth. To the samurai class it is a symbol of prosperity and good luck. To farmers, the reappearance of dragonflies in spring, signifies a good harvest. The dragonfly is Japan’s national symbol, which is why Japan is also known as the Island of the Dragonfly, Akitsushima.

In Western philosophy, one often thinks of life as a one way street. One is born, lives, and dies. In Eastern philosophy, particularly Buddhist philosophy, death becomes passage to a new life. This is similar but different from Christian teaching about the Resurrection.

I am far too much of an amateur to explain the concept of Rebirth, 轉世.

After Matsuo Basho’s death, Kikaku gave us a lovely portrait of the poet, mentioning that his master was “a lonely man and very poor, but his virtues were infinite.” I too am poor and therefore, must make a living. If you wish, you can check out this Dragonfly Lamp, available online, shipping in the continental US.