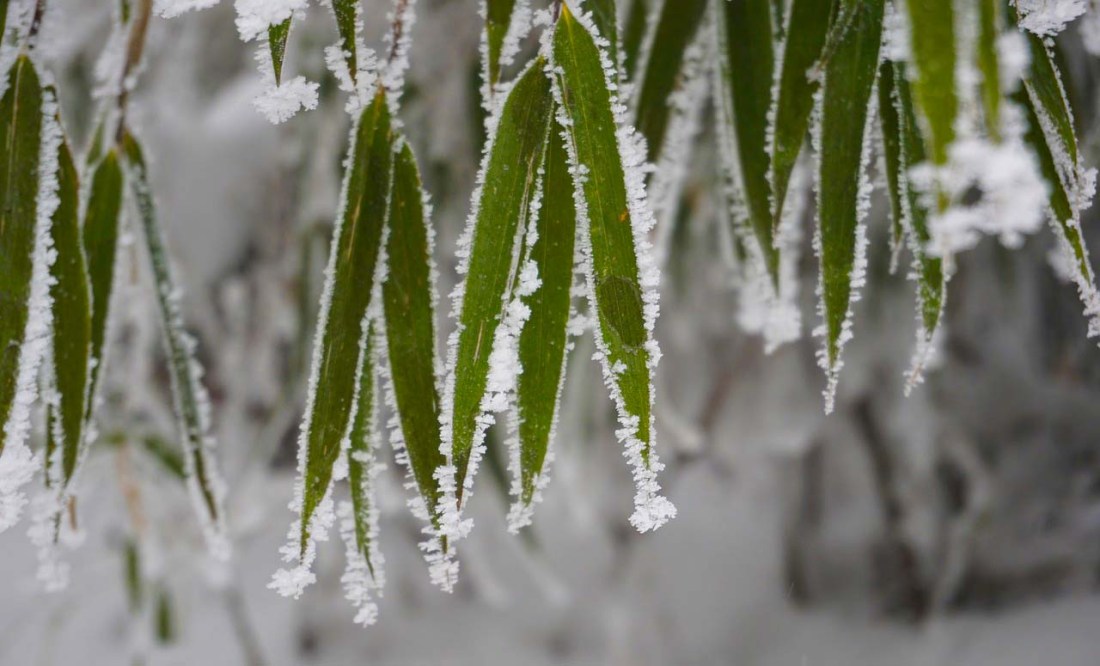 withered and bowed
a world upside down,
as bamboo to snow

shiore fusu ya yo wa sakasama no yuki no take

In 1666, after the death of his samurai master, Matsuo Bashō, age 24, moved to Kyoto to study haiku. That winter Bashō visited the home of a young couple whose child had died. Bowing in respect, he entered, and saw the parents’ tear-streaked faces.

The scene reminded Basho of a Nōh play by Zeami Motokiyo (c. 1363 – c. 1443), Take no Yuki, Snow on Bamboo. In the play, a father rids himself of his wife for a “trifling” reason. He sends his daughter to live with he mother and keeps his son to be the heir to his fortune, and takes a new wife. When the father goes on a pilgrimage, the step-mother sends her step-son into a bamboo grove and the freezing snow. He dies, but the gods, moved by the grief of his father and real mother, bring him back to life.

In the play, Tsukiwaka, the young boy, is given these lines just before he dies:

The wind stabbed him, and the night wore on,
The snow grew hard with ice, he could not brush away.
“I will go back,” he thought, and pushed at the barred gate.
“Open!” he cried, and pounded with his frozen hands.
No one heard him, his blows made no sound.
“Oh the cold, the cold! I cannot bear.
Help, help Tsukiwaka!”
Never did the wind blow more wildly!

Shiore fusu, 萎れ伏 , withered and bent down.  伏, fusu, bowing down, a mark of respect Bashō gave the grieving couple on entering their home.

Sakasama, 逆さま, literally upside down, inverted; yo wa, 世は, the world, but a word play on being unsteady or tipsy. 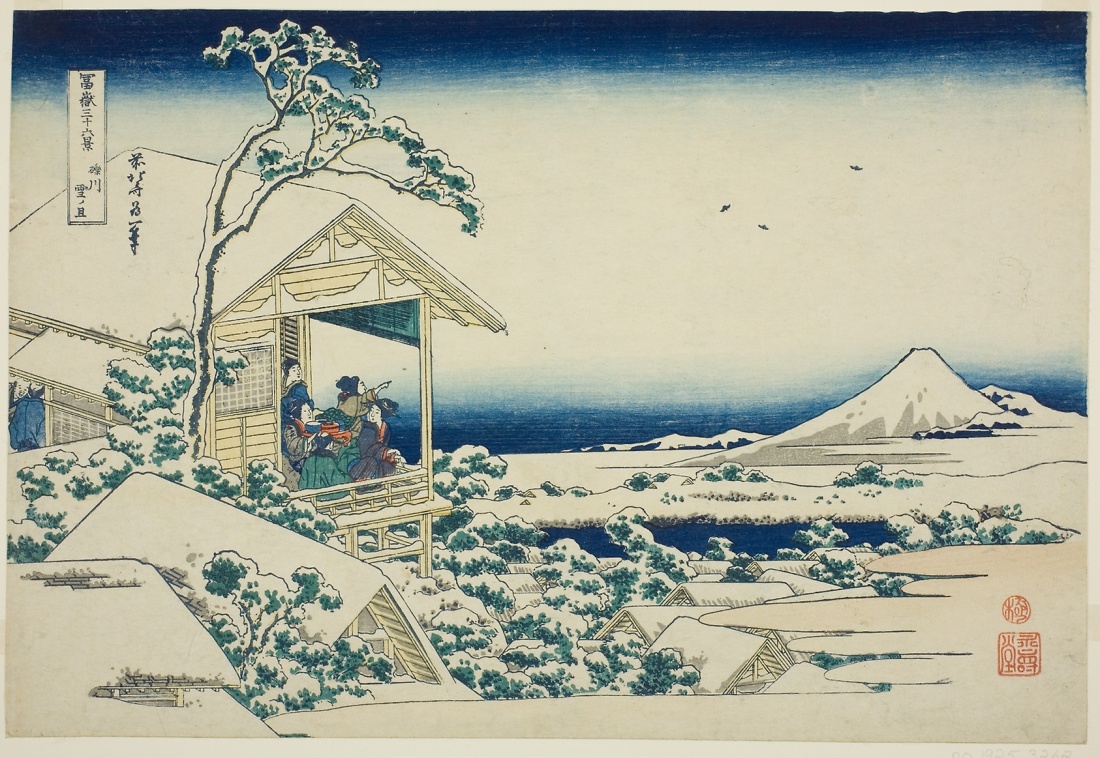 Normally,
A black crow is detestable –
But on a snowy morning?

A haiku about nothing

Before there was Jerry Seinfeld, there was Matsuo Basho. Jerry Seinfeld was an American comedian who made observational humor. He had a long-running television show, whose moniker was, ” a show about nothing”, where the nothings consisted of the daily doings of Jerry and his friends. These events somehow became funny.

Like Seinfeld, Basho’s haiku often concerned everyday events that in one way or another took on meaning.

This poem was written in 1691, at Gichu-ji, a Tendai temple in Otsu on Lake Biwa, where Basho often stayed in a cottage called Mumyo-an, “Nameless Hut”. Basho was there with Mizuta Masahide, and with little to do replied to a friend who had written him a letter.

“Yesterday, it snowed and was terribly cold. I was in my hut and so, did not go anywhere. Then I had this thought. ‘Normally, a black crow is a detestable thing, but what about on a snowy morning?'”

“Snowy Morning from Koishikawa” (Koishikawa yuki no ashita), circa 1830, by Katsushika Hokusai, 葛飾 北斎, from the series “Thirty-six Views of Mount Fuji (Fugaku sanjurokkei)”. This image may be found at the Art Institute of Chicago and elsewhere. 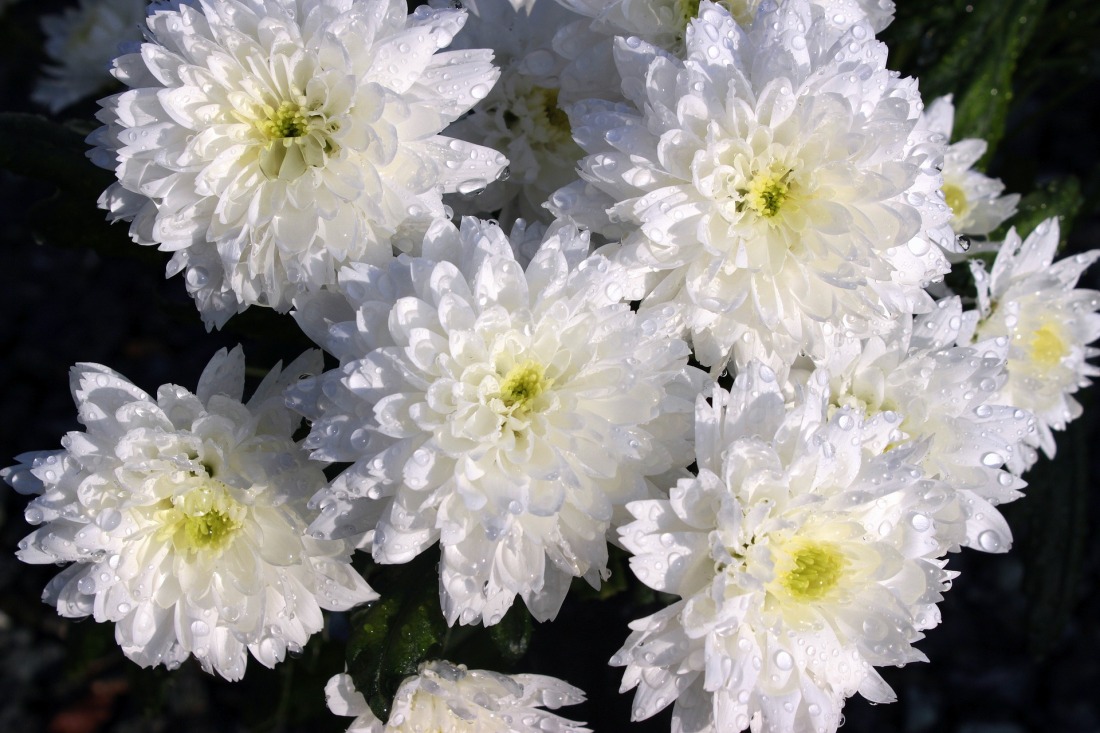 In 1694, Bashō left Edo (Tokyo) for one last trip south to his place of birth and to the Ise Shrine. Arriving in Osaka, where he had studied as a youth, he visited the poetess, Shiba Sonome, who was born in Ise, the daughter of a priest from the Ise Shrine, and later the wife of a doctor. Both Sonome and her husband had been students of Bashō. Later, after the death of her husband, she became well known for her poetry, her care for others, and her beauty.

Dust on Chrysanthemums, Kiku no Chiri, 菊の塵 was one of her published works.

Bashō did not live to make it to the Ise Shrine. Within a month, as the chrysanthemum flower began to fade, he died. The date, November 28, 1694.

This haiku is often translated from the point of view of the poet gazing at the chrysanthemum. I prefer a more objective view. The eye of the white chrysanthemum exists without dust.

白菊, shiragiku, the first two characters of the haiku, translate as white chrysanthemum. 立, literally, to live, to exist, suggests, at least to me, the Zen idea that no dust exists in the eye of the chrysanthemum. 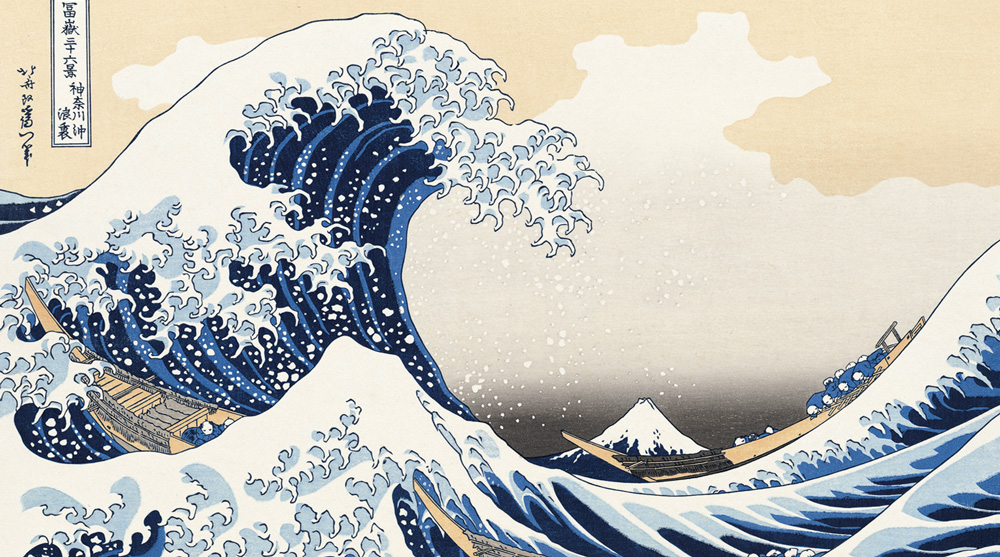